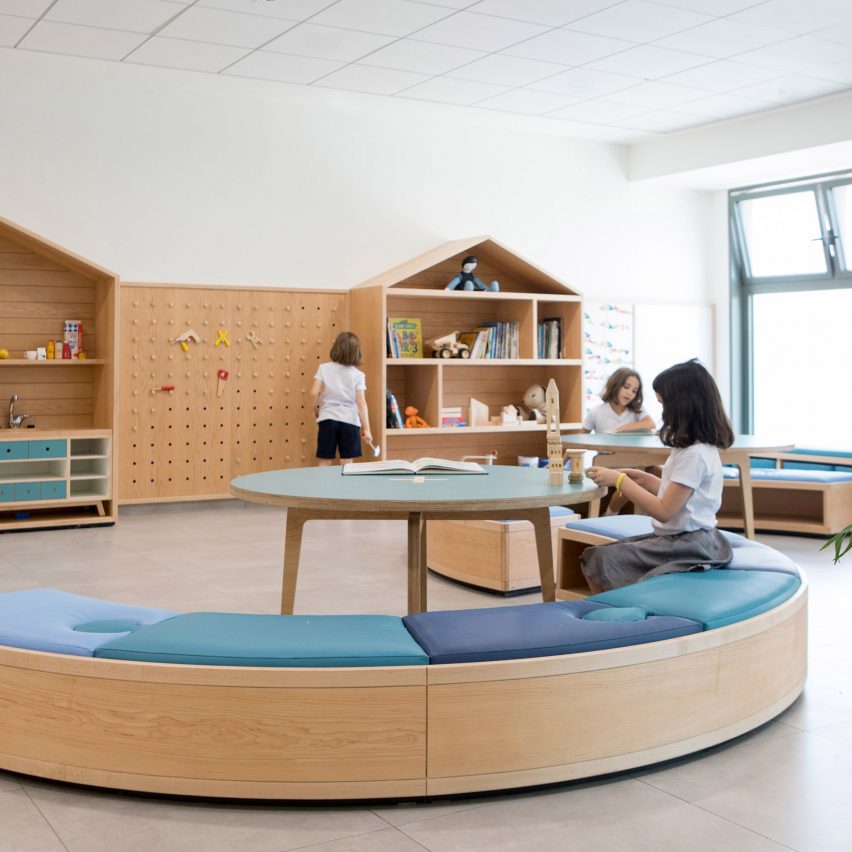 The local designer created the interiors for a public school near the city’s Sarona neighbourhood that caters to children with disabilities and learning difficulties. 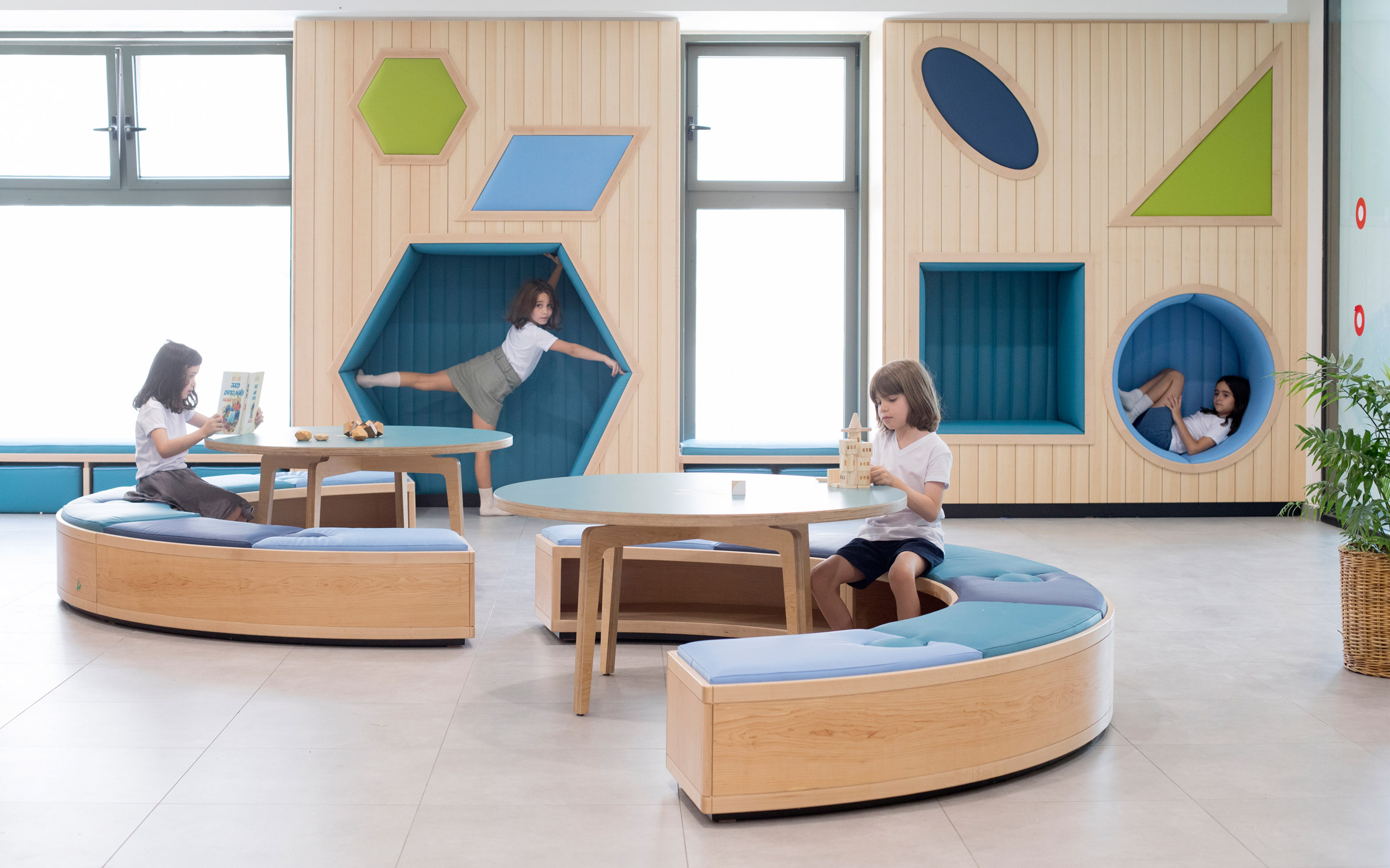 Hay said her aim was to celebrate the diversity of the student body, encourage interaction and different types of learning. She nicknamed the project The First Inclusive School.

“The goal was to translate the philosophy of inclusive education into a physical environment that promotes joyful experiential learning,” Hay said. 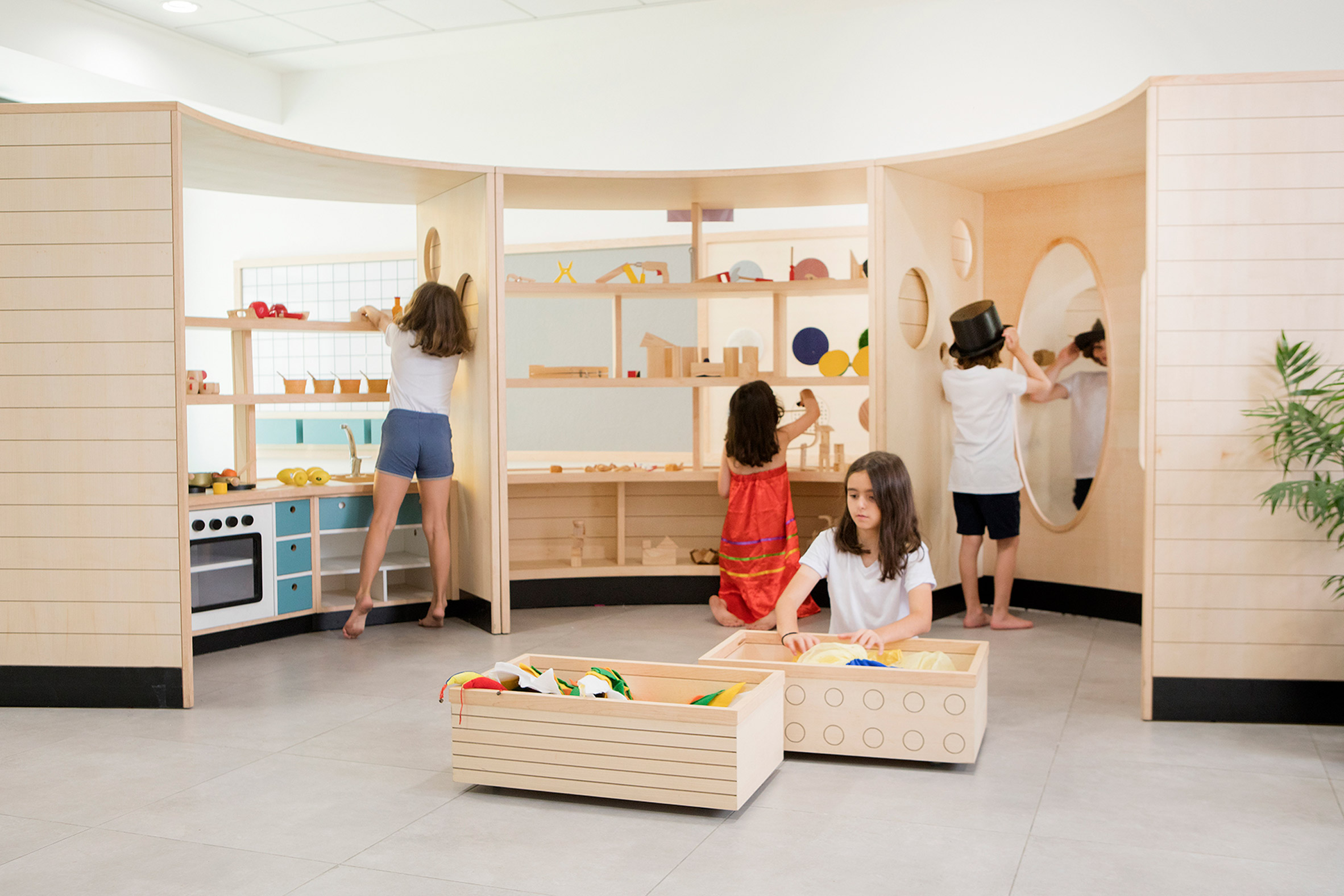 “This designed space inspires kids to be engaged in multiple ways while enhancing a feeling of belonging and empathy,” she added. 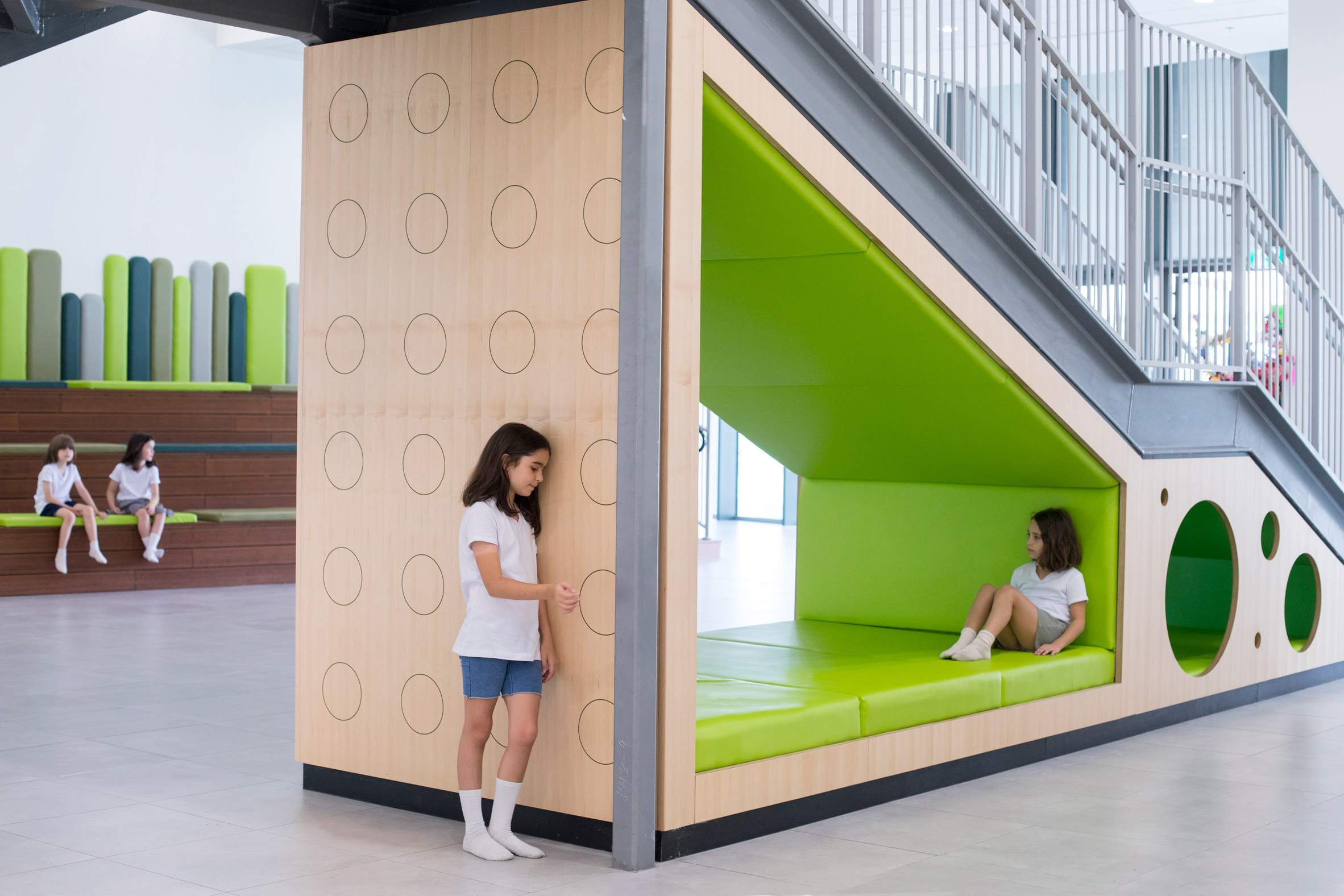 Hay designed the interiors of two of the floors of the six-storey school, officially called Bikurim.

Her designs include pale wooden volumes that serve as activity stations to promote learning. Other built-ins provide seating, cabinetry, desks and nooks. 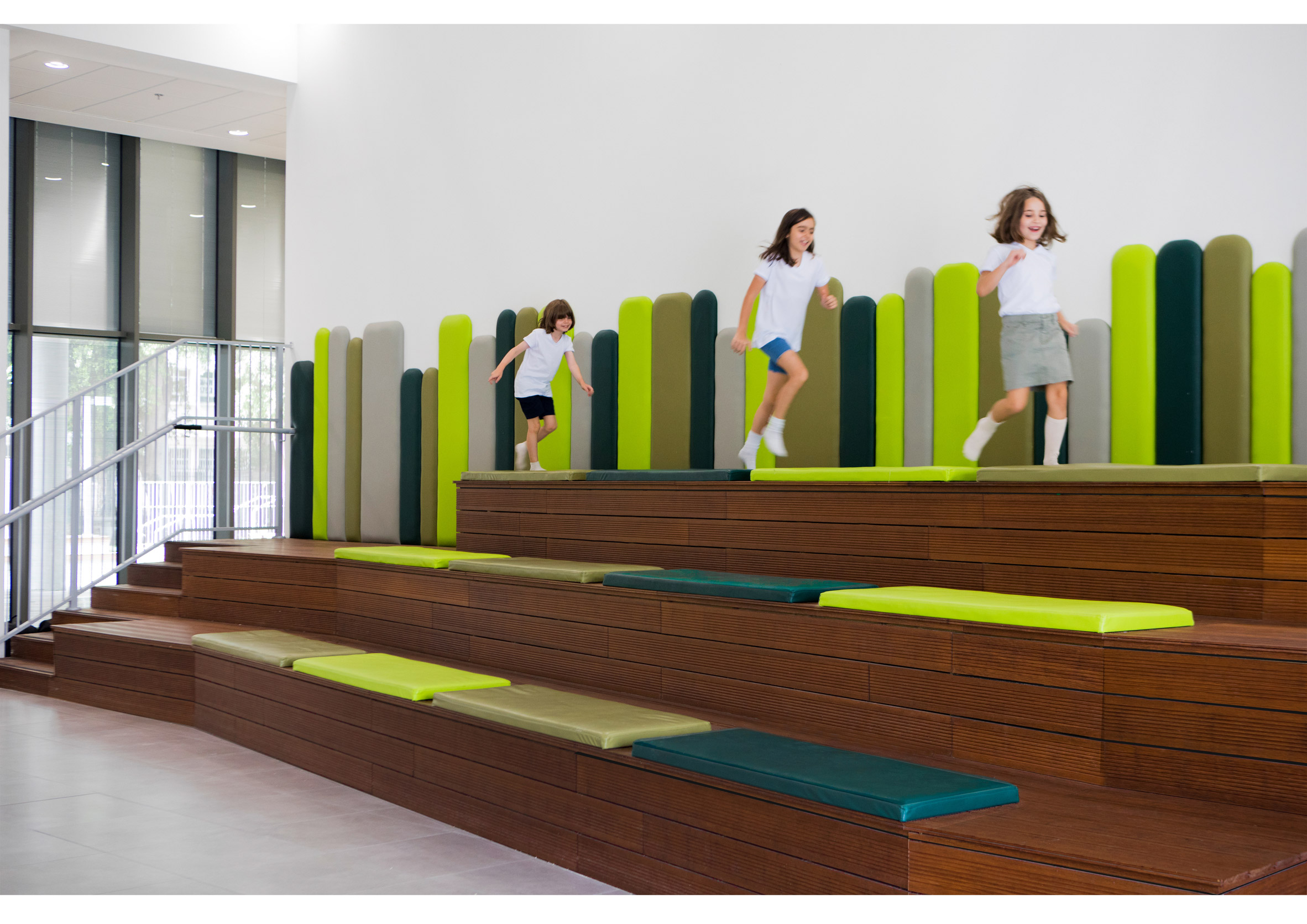 Shades of green and blue are used to break up the white walls and grey floors. “The calm colours and natural wooden materials were used to avoid emotional overload,” Hay added.

The designer worked with a team of teachers and experts in disabilities to develop different aspects of the design. They include two, movable U-shaped benches that can be combined to form a circle in one classroom. The design is able to accommodate students in wheelchairs.

“The concept of a group circle was used to create a circular seating bench split into two halves, allowing for different seating arrangements wherever possible for any child wanting to join in, for example, a child in a wheelchair,” said Sarit Shani Hay Studio.

Other features include a wall design in the outline of a home that encloses a play kitchen. Geometric nooks in the walls offer personal areas for relaxing and reading. 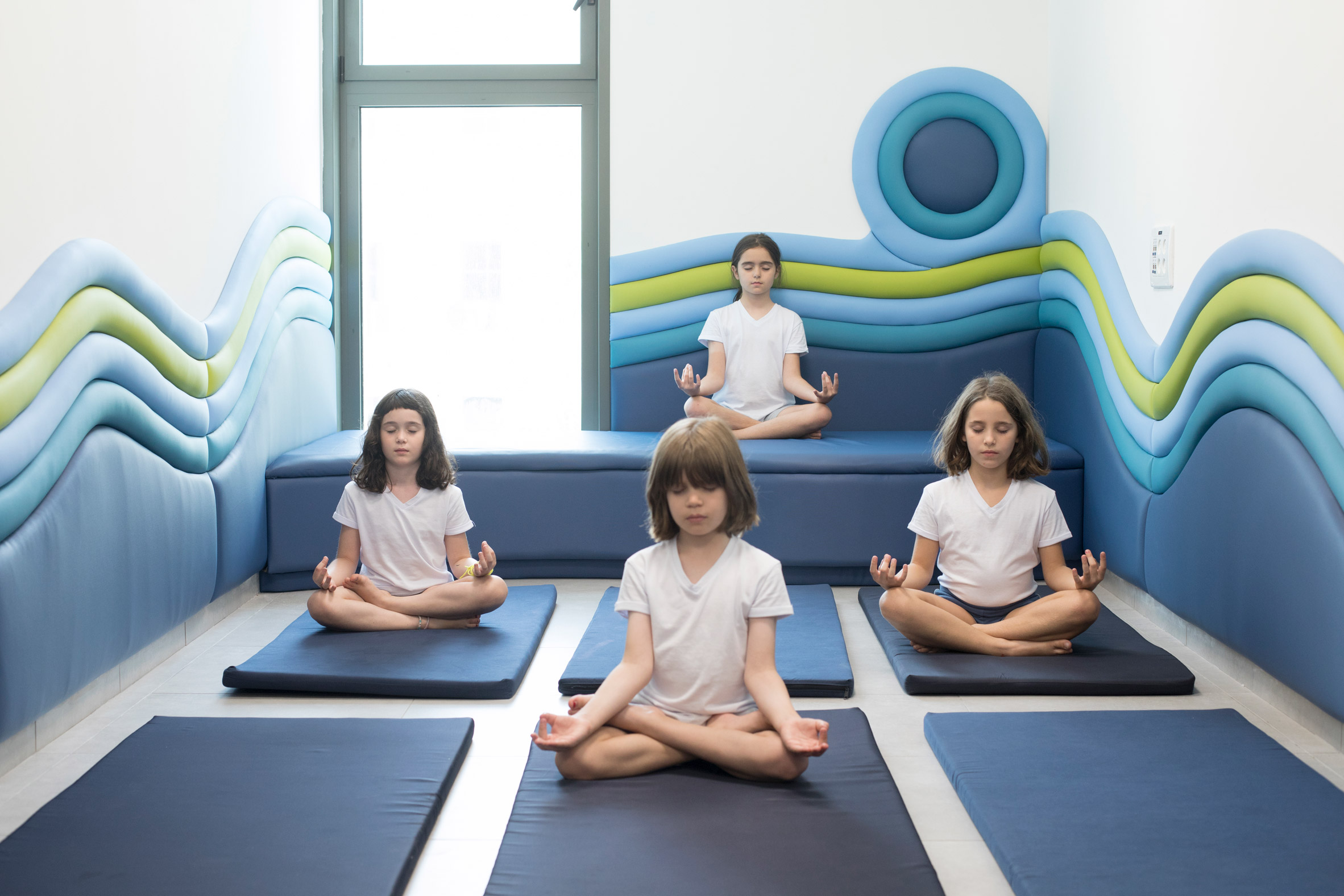 Another classroom has a tall abacus with cubes on rods that spin. Letters and shapes are engraved on the sides to help children learn Braille and Sign language.

“This project gave us the opportunity to explore in-depth what happens when design meets pedagogy and how can we use design as a tool for social change – as a tool for promoting inclusion, and enhancing all children’s well being,” said Hay. 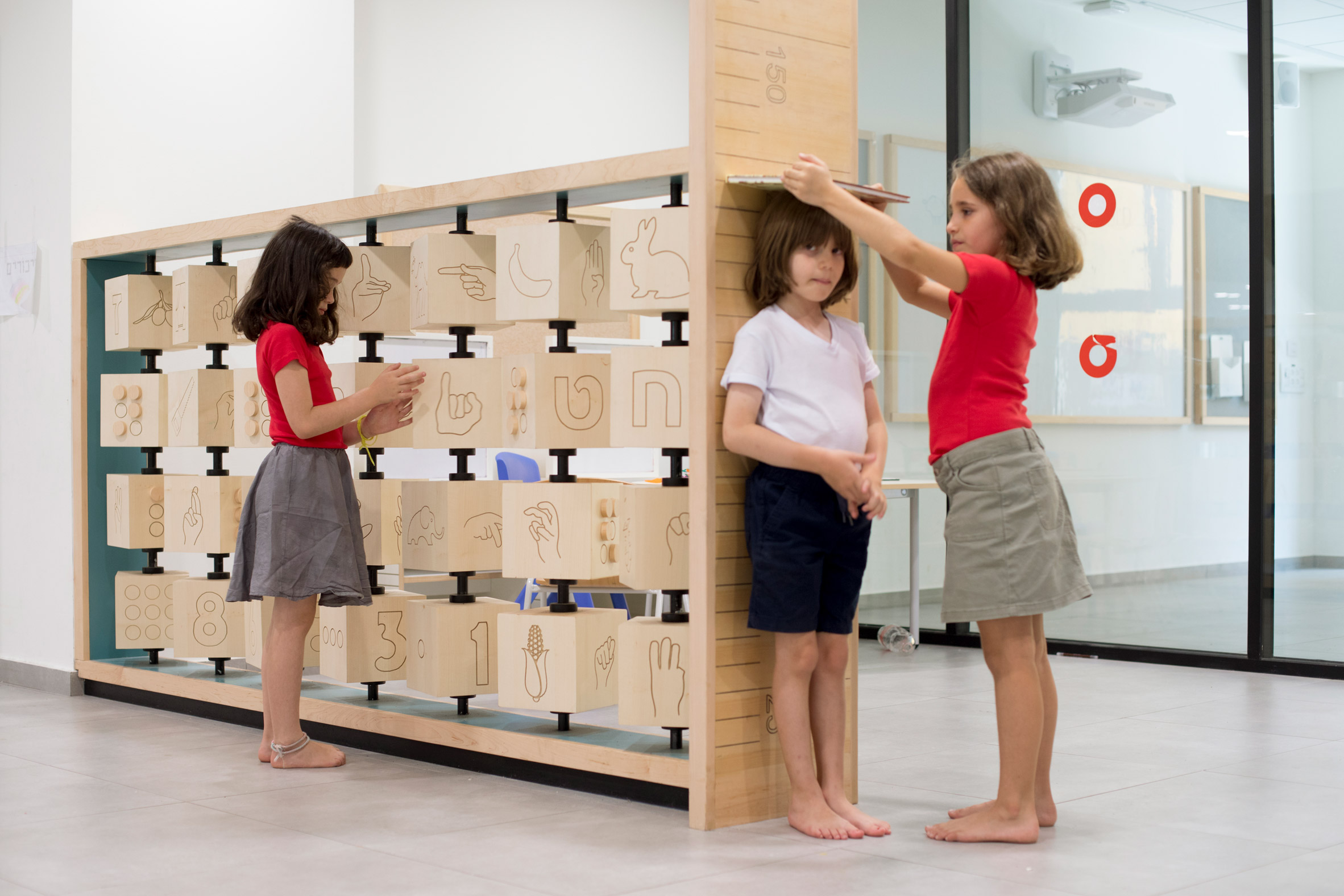 At the entry is a staircase with triangular nook underneath and two, smaller crannies. A stadium-like structure nearby is outfitted with cushions for climbing and sitting on.

The elementary school is complete with a yoga and meditation space and a room for physical therapy. 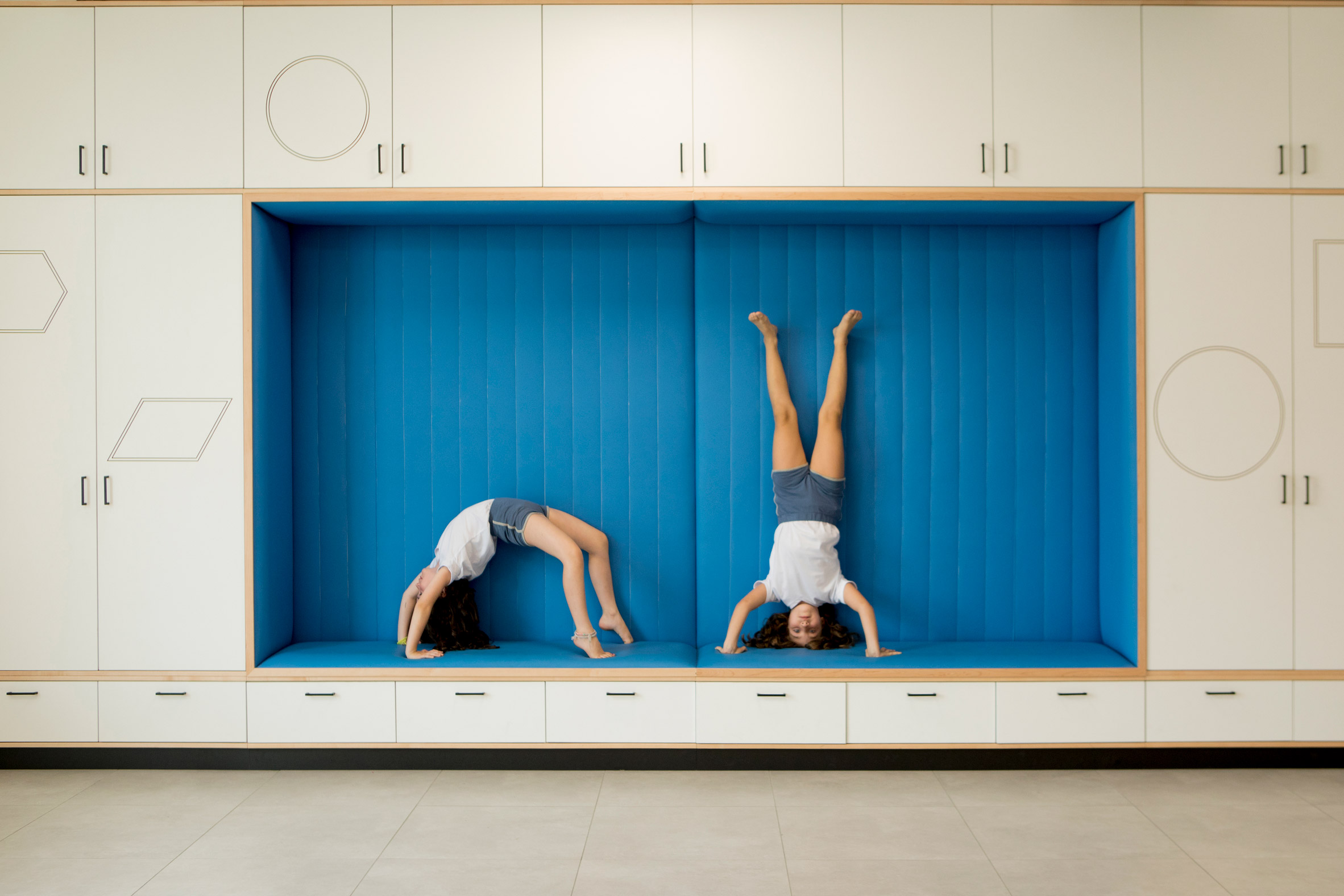 Hay, who launched her eponymous design studio in Tel Aviv in 1995, specialises in children’s furniture and designs. Her other projects include a colourful school in Tel Aviv for the children of refugees.

Other schools are Brooklyn’s Maple Street School, a preschool in Boston with colourful walls, one in China with a giant slide and a Spanish kindergarten made from prefabricated panels.

Photography is by Roni Cnaani.